Most of the wastewater Loudoun Water collects from customers (13.8 million gallons per day) is treated by DC Water at their Blue Plains Advanced Wastewater Treatment Plant (Blue Plains) through an agreement held between the authorities. Blue Plains has the capacity to treat up to 384 million gallons of sewage a day.

To accommodate for future growth in our service area and to reduce the loading sent to Blue Plains, Loudoun Water constructed the Broad Run Water Reclamation Facility(BRWRF), which is located on our Ashburn campus. The BRWRF was first opened in 2008 and currently treats about 4 million gallons per day (MGD) of sewage with a total current capacity of 11 MGD. Of the 4 MGD that is currently treated, about 1 MGD is distributed back to Loudoun Water customers as reclaimed water.

Some of those stringent discharge limits include a total nitrogen limit (TN) of 4 mg/L, a total phosphorus limit (TP) of 0.1 mg/L, a Total Kjeldahl Nitrogen (TKN) limit of 1.0 mg/L, and a chemical oxygen demand (COD) limit of 10 mg/L.

Process Flow Schematic:
This process was developed during a nine-month pilot study which demonstrated its treatment capabilities and provided the basis for process design. The facility incorporates a fully automated plant-wide control system to optimize treatment, energy and chemical consumptions. 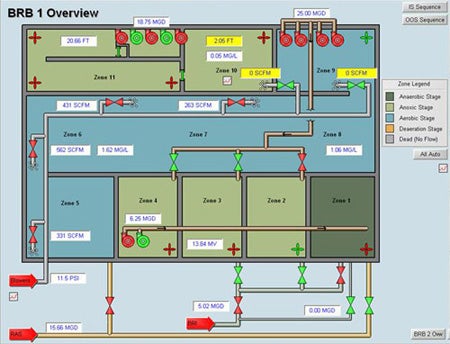 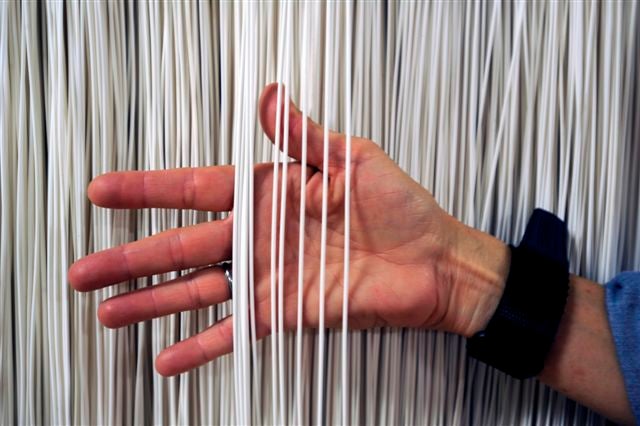 Membranes:
The membranes are dispersed between twelve membrane tanks. Some advantages of membrane filtration include improved water quality that enables water reuse and elimination of the need for clarifiers and inherent settling issues.

Loudoun Water's Community System customers in the Transition Policy or Rural Areas have their wastewater treated to a high degree at a small on-site facility that discharges into small creeks and tributaries that eventually lead to the Potomac River.

Water Reuse
The use of reclaimed (highly treated) wastewater for non-potable uses is rapidly taking hold throughout the United States as a sustainable alternative to using highly treated drinking water for irrigation and cooling tower coolant. Reclaimed water is available from Loudoun Water's Broad Run Water Reclamation Facility. There are key benefits of using reclaimed water for non-potable purposes: it conserves precious drinking water, reduces water withdrawal from rivers, reduces nutrient loadings to the Chesapeake watershed and is cost effective.